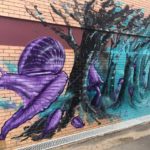 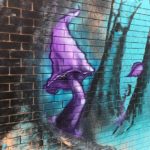 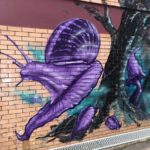 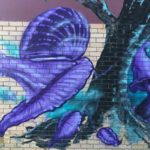 Drawn Together Festival in Nambour was comprised of urban street artists and as a project to connect community with the environment. Mr Mupz was invited to be part of the festival in 2017. He was asked to create a mural that would benefit the chosen site. The design was based around a vortex to teleport the viewer into the mysterious world beyond. Elements of our natural world were transformed and gave the
perception of two worlds colliding. This mural was painted using Resene acrylics and Molotow aerosol over 3 days.