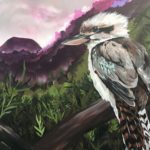 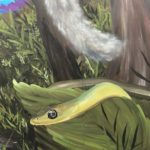 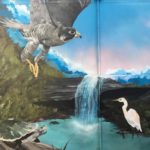 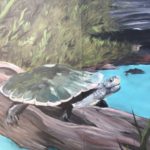 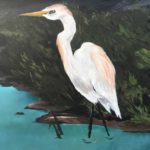 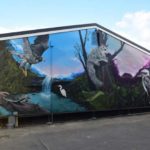 David Houghton and Mr Mupz were approached by the Sunshine Coast school after doing a series of volunteer murals for them previously. After a meeting with Denise (the head of the after hour school care), a concept was developed around native animals and the environment surrounding the Sunshine Coast hinterland. The idea was brought to the local parent teacher committee and approved ready for the design stage.

Mr Mupz was designing this project and wanted to give an in depth view of the sunshine coast environment. The perspective was going to be very important, also the structure with so many different elements to include. The design was developed around animals including a Kookaburra, freshwater turtle, peregrine Falcon, egret, tree snake, quall, Richmond birdwing butterfly, sugar glider and local wren. With Mt Coolum in the background and Buderim waterfall in the foreground, the mural has highlighted some of the beautiful natural elements that are on the Sunshine Coast.

This mural is for the Coolum after hours care at the primary school, but was produced for the local community to enjoy. After completing this mural, an idea to continue it onto the pavement had come up. The intended future project will incorporate the original mural flowing into a pavement art piece. This will mural is currently in the works for the future.

The artists would like to give a big thanks to Resene paints for providing a fantastic and suitable colour range for the mural. Also Molotow Australia for their exceptional paint and colour range. Using only the highest quality materials available, this project was completed to a professional standard and will maintain its vibrancy for future generations to enjoy. This mural was designed in 2 days and then completed over a period of 4 days.